This entry was posted in Events, Regionwide on October 31, 2017 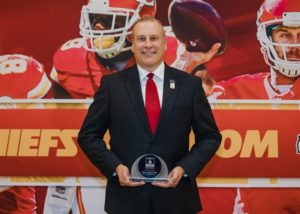 At its annual awards celebration held October 19 at Arrowhead Stadium in Kansas City, Mo., the Mid-America Region of the Design-Build Institute of America (DBIA-MAR), honored the Chief of the Bio-Containment Procurement Branch for the Department of Homeland Security (DHS) – Federal Law Enforcement Training Centers (FLETC), Richard J. Formella, PMP, DBIA, with a 2017 Leadership Award. The honor is bestowed upon an individual who exemplifies design-build done right in the region, which includes Missouri, Kansas, Iowa and Nebraska.

At the FLETC, Formella currently leads the team providing design and construction contracting support to the DHS Science and Technology Directorate for major laboratory renovations and new construction an overall $1.5 billion program, including the $1.3 billion National Bio &amp; Agro Defense Facility (NBAF) in Manhattan, Kan. Formella has over 32 years of federal acquisition experience and joined the FLETC in 2006 serving as the Head of the Contracting Activity through 2014. He is currently a member of the DBIA National Board of Directors and the Chair of the DBIA Federal Committee. Prior to joining DHS, Mr. Formella was employed by the Department of Justice (DOJ), Federal Bureau of Prisons (BOP) for over 20 years, and concluded his service at BOP as the Chief of Construction Contracting where he led and administered the $3 billion dollar new federal prison construction contracting program.

Lisa Washington, CAE, Executive Director/CEO of DBIA National, said this about Formella, “In my role, I have the distinct honor of meeting and working with thousands of industry leaders. Some stick out for their passion and sincere interest in making a difference. Rich Formella is most certainly one of those special people — and his commitment to making a difference in the industry has contributed greatly to the growth of DBIA and design-build. He embodies the characteristics of a master builder, taking pride in his role as a procurement executive while working to understand and embrace the roles of all with whom he collaborates. With his advocacy, he seeks to carve out a prominent space for design-build in the Federal sector. Rich is an incredible representative of the profession, and extremely deserving of the Region’s Leadership Award.”